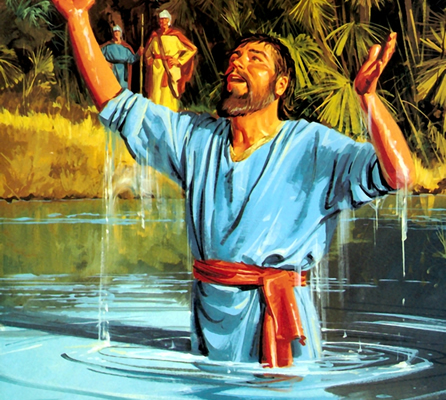 A fun Bible story you can tell your children

Here is a story for you to tell at home, perhaps at bedtime or as part of a God-time during your day. Enjoy doing the actions and sound effects together. You could also use this story in a children’s session, perhaps splitting the children into two groups: one doing the strong actions and one the weak.

Naaman was powerful. (Make a strong man action and roar.) He was commander of the army of Syria, a brave and victorious soldier. And his life would have been perfect, apart from one thing. He had a disease called leprosy. It made his skin rough and sore. And it made him unhappy.
Naaman had a slave girl. She had no power, at all. (Hang your heads and sigh.) She was stolen from her family during one of Naaman’s raids into Israel. We don’t even know her name, but one day she spoke to Naaman’s wife: “If my master could go to the prophet in Israel, he would surely be able to heal him of his leprosy.”
When Naaman heard, he went to see the king of Syria. A man who was more powerful than Naaman. (Make another strong man action and roar.) The king did not want Naaman to be sick and unhappy. And when he heard about the prophet, he sent Naaman to the king of Israel, with 30,000 pieces of silver, 6,000 pieces of gold, and ten changes of the finest clothing. Oh, and a letter that said the following: “I am sending my servant, Naaman, to you. I want you to cure him of his leprosy.”

The king of Israel was actually quite weak. (Hang your heads again and sigh.) The army of Syria had beaten him in battle, time and again. And when he received the letter from the Syrian king, he trembled with fear and tore his clothes. “It’s a trap!” he cried. “Am I God? Can I heal a man of leprosy? Of course not. The king of Syria has only set me this task because he knows I will fail. And when I do, it will give him yet another excuse to invade!” The prophet, Elisha, had no power of his own. But he served a God who was more powerful than any man. (Make a strong man action and roar.)

When he heard what happened, he told the king of Israel to send Naaman to him. “There’s no need to be upset”, he assured the king. “I will show him that, in Israel, there truly lives one of God’s prophets.” And so Naaman came to the house of Elisha. He was in his chariot. His wagons were loaded with gold and silver and fine clothes. But, before him, in front of the prophet’s house, stood only Elisha’s humble messenger. (Hang your heads and sigh.) “Wash yourself seven times, in the Jordan river”, the messenger told Naaman, “and you will be healed.” Then he turned and walked away. Naaman was furious! (Make a strong man action and roar.) “What is the meaning of this?” he shouted at his men and at his servants and at the air. “I come all this way to be greeted by a lowly messenger? I thought that the prophet himself would come out to greet me. And that he would wave his hand or something, and I would be healed. But now he wants me to bathe in a river. And not even a beautiful river like the Pharpar or the Abana, back home in Damascus. No, he wants me to wash myself in some filthy Israelite stream!” Then he stamped away in a huff.

Naaman’s servants didn’t have any power at all. (Hang your heads and sigh.) But they went after him, anyway. “Master!” they said. “The prophet’s offer is amazing. If all you have to do is to wash yourself in a river, then why not, at least, give it a go?” So Naaman did. He washed himself in the River Jordan. Seven times he went down. And when he came up that seventh time, his leprosy was gone, replaced by skin as fresh as a child’s. So Naaman returned to Elisha’s house. And, this time, the prophet came out to meet him. “I am so thankful for what your God has done for me,” said Naaman. “Here are 30,000 pieces of silver, 6,000 pieces of gold, and ten changes of the finest clothing. Please accept them, with my thanks.” Elisha knew that he hadn’t healed Naaman by his own power. (Make a strong man action and roar.)

It was God who had done it. So he told Naaman: “Thank you. But no.” “Then let me show my gratitude, in another way,” Naaman insisted. “Allow me to take two mule-loads of dirt from this place. I will carry it home, and spread it on the ground, and worship your God upon it.” And that is how the powerful soldier (make a strong man action and roar) who was made weak by disease (hang your heads and sigh) gave thanks to God, who was way more powerful still. (Make a strong man action and roar.)

A STORY FOR HOME